Flowers of the Pyrenees – Flora Pyrenaica I, Blue

The natural phenomenon that is Pyrenees, tectonic collision by-product, geological immensity, inexhaustible mountain range that separates Iberia from the rest of Europe.. And just that same central chunk that i have already visited so many times.. and still so many new places, new sights, new things to delight upon. I wonder. How do peeps manage to take in the Alps? ..the Himalayas? Unimaginable.

This year it was particularly the flowers, i’d like to share some of them.. to begin with some blue flowers.

One of my favourites.. Gentiana verna, Spring Gentians.

The Spring Gentian, Gentiana verna, in Spanish Genciana de primavera or sometimes Gitanilla, is a small and delicate bloom which can be found widely in the Pyrenees from late Spring and into Summer. It occurs in mountain ranges across Europe, usually above 1500m..but also at sea level in the West of Ireland, not far from where i was born, in the Burren (An Boireann) of Clare. 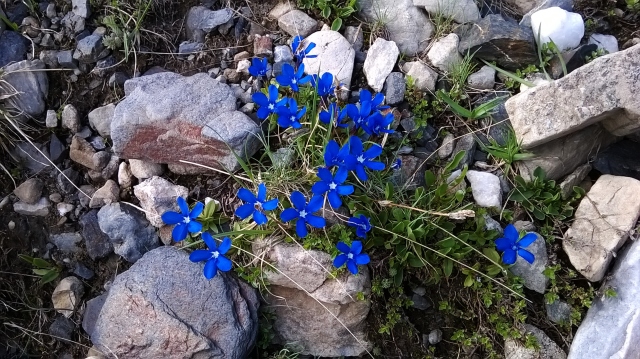 More Spring Gentians, at 2300m not far from the Ibones de Paderna.

Another somewhat larger blue Gentian found commonly in the Pyrenees is Gentiana acaulis (Stemless Gentian), growing up to 6-7cm. Again usually above 1500m, also in other highland areas across Europe..but, alas, not by the sea in Éire. 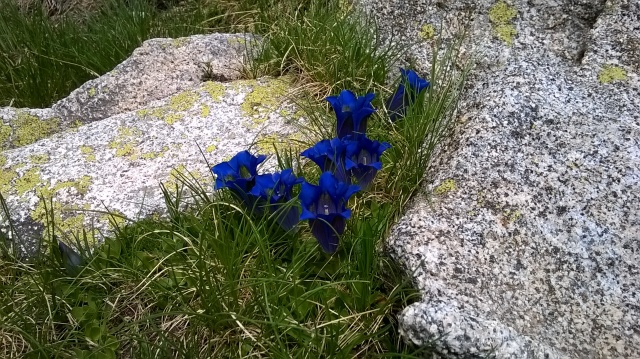 A very common flower in the Pyrenees – and much larger and more visible than the blue Gentians – is the Iris (Iris latifolia) known as Lirio Azul in Spanish. Not unusual to see it cultivated in gardens – and weirdly known as the ‘English’ Iris – this plant is in fact native to the Pyrenees where you can find whole meadows of it blooming in late June or July.

From the very big to the very small, the Alpine Forget-me-not (Myosotis alpina), in Spanish Nomeolvides, is a true high mountain flower. This minute bloom – the flowers measure less than  a centimeter in diameter – can be found in the Pyrenees up to 3100m. 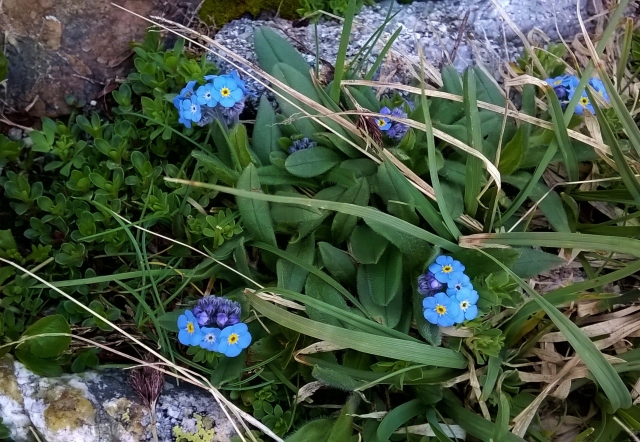 Another rare small blue flower, this one endemic to the Pyrenees, is Veronica nummularia – rare enough not to have a common name in either English or Spanish. Also to be found only high in the mountains. 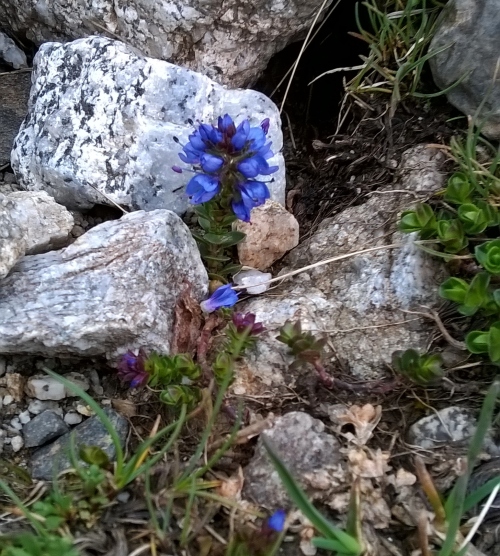 Éireannach is ea mé, i mo chonaí insan Spáinn. Rugadh mé i lár na tuaithe, ar feadh blianta bhí mé ag teitheadh uaithi, i bhfad as an tuath, ach sa deireadh d'fhill mé, ar ais go dtí an tuath.. An Irishman am I, settled in Spain. Born was I in the middle of the country, for years I ran from it, far from the country, but in the end I returned, back to the country..
View all posts by coldspringdays →
This entry was posted in Conservation, flora, Mountain, Nature and tagged Benasque Valley, Gentiana acaulis, Gentiana verna, gentians, Iris latifolia, Myosotis alpina, nature, Pirineos, Pyrenees, Spring Gentian, Summer, Valle de Benasque, Veronica nummularia. Bookmark the permalink.

1 Response to Flowers of the Pyrenees – Flora Pyrenaica I, Blue