One more Wonder of Water..from the disappearing Pyrenees

Posted on August 2, 2016 by coldspringdays

Many and varied are the water wonders of the mountain chain that separates the Iberian peninsula from the rest of Europe. Beyond surging rivers and crashing falls, you have the most stunningly placid mountain lakes..but you also have the dramatic natural phenomenon of powerful Summer storms, when water falls from the skies with an intensity rarely equalled..and you have the very special water phenomenon seen below..

This photo was taken in mid-July, at 3150m, at the point where the Maladeta Glacier comes to an end below the rocky ridge that climbs to 3308m. Water frozen in the form of snow, firn to be more precise – compacted refrozen snow. This is the snow which, surviving the heat of Summer and further compacting as more snow falls on top of it, eventually transforms into ice, glacier ice. Now i’m a sucker for fine waterfalls and mountain lakes knock me out..but if i get to choose my mountain water feature, give me glaciers any day. On this particular day i didn’t get to see any ice (in fact didn’t get to see anything much at all, the weather was very closed in all day) as snow covered practically all of the glaciated extension from the upper limit of 3200/3150m down to about 2600m at the lowest point. But i thought it was pretty cool that you could still get almost 600 vertical meters of ascent on snow in the middle of July, in a nominally “hot” country like Spain. Indeed, despite the fact that the snow was a tad hard and irregular on the surface and somewhat discoloured by dirt, i was thinking: damn, shudda brought skis! 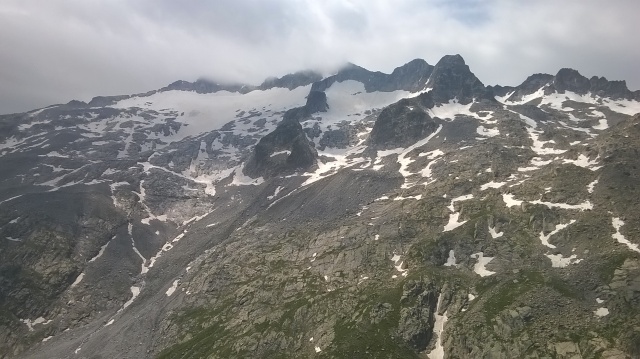 The Maladeta Glacier – as seen in the upper left of the photo, covered in snow – amounts to little over 30 hectares of ice and reaches down from just under 3200m to no lower than 2800m. Not exactly huge. And shrinking year by year. Pyrenean glaciers have been receding thru the twentieth century, but the rate of recession has really accelerated in the last 10-15 years. That’s what i meant in the title by “the disappearing Pyrenees” – the Pyrenees as we know them today are disappearing. Within 40-50 years there will be no glaciers left in the Pyrenees. This particular wonder of water will be gone. Of course there will still be snow, and maybe even quite a lot of it some years..but there will be no permanent ice. Indeed, the masses of ice that remain today are already more dead than alive..they are residual ice-fields that practically no longer move. They no longer flow, as does a real glacier, a river of ice moving with gravity from high to low.

For more on the disappearing glaciers of the Pyrenees, check this article in Spanish.

Éireannach is ea mé, i mo chonaí insan Spáinn. Rugadh mé i lár na tuaithe, ar feadh blianta bhí mé ag teitheadh uaithi, i bhfad as an tuath, ach sa deireadh d'fhill mé, ar ais go dtí an tuath.. An Irishman am I, settled in Spain. Born was I in the middle of the country, for years I ran from it, far from the country, but in the end I returned, back to the country..
View all posts by coldspringdays →
This entry was posted in Climate change, Conservation, Mountain, Nature, snow, the seasons, water, Weather and tagged Benasque Valley, Glaciar de Maladeta, la Maladeta, lack of snow, Maladeta Glacier, Pirineos, Pyrenees, Valle de Benasque. Bookmark the permalink.