Family group on top of La Peñota, 1945m, with the Sierra de Guadarrama spreading out in the background

Last weekend to celebrate the arrival of Summer we got out to – and up – the mountains en famille! And while it wasn’t the first peak my almost three-year-old son has been up,  it was the first in which he carried out some more or less significant part of the ascent/descent on his own little legs.. and it was also the first in which the full family group including both progenitors and Auntie A. took part. We’re quite aware that it probably isn’t a great idea to drag kids around the mountains if the little ones aren’t into it, but, so far, our little guy seems to really like it. It has become increasingly common to hear platitudes about how important it is for children to be in contact with Nature, but sadly the reality for most urban-bound youngsters is that they are lucky if they have occasional contact with the street outside their home.. let alone with distant, far-flung and sometimes daunting Nature. Even in the small town of Cercedilla where we live, at the foot of the mountains,  many kids rarely transgress the city limits. And no, seeing wildlife documentaries on tv or visiting your local park don’t constitute profound experiences of the natural world. Nor do holidays at the beach in Summer or at ski resorts in Winter..they just don’t cut it, man – ¡Pan forbid! – ski stations in particular are, I would say, more of an anti-nature experience. As for zoos and “wildlife” parks, no comment. Now I’m not saying you have to haul your sprogs up a mountain every weekend, but I do believe that ‘contact with Nature’ means that you have to get away from the urb, and from large crowds of people, and mechanized transport. And if you do get some way up a mountain, then yes – unless you are in some kind of prostituted “National Park” – there’s a good chance you and yours will really be experiencing.. Nature! 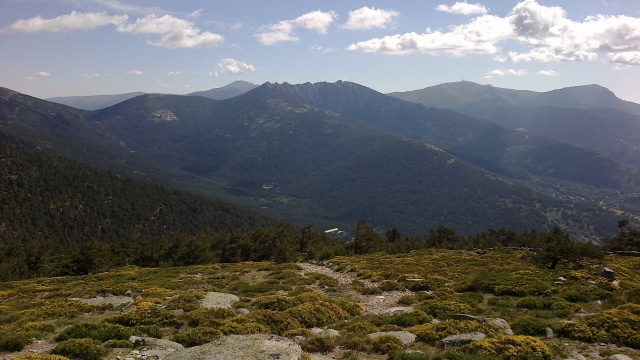 Looking down into the wonderful Fuenfría Valley, from near the top of La Peñota.

Éireannach is ea mé, i mo chonaí insan Spáinn. Rugadh mé i lár na tuaithe, ar feadh blianta bhí mé ag teitheadh uaithi, i bhfad as an tuath, ach sa deireadh d'fhill mé, ar ais go dtí an tuath.. An Irishman am I, settled in Spain. Born was I in the middle of the country, for years I ran from it, far from the country, but in the end I returned, back to the country..
View all posts by coldspringdays →
This entry was posted in children in Nature, Nature, the seasons and tagged getting back to nature, kids in the mountains, La Peñota, nature, Sierra Guadarrama. Bookmark the permalink.