Posted on December 3, 2011 by coldspringdays

Towards the  end of November the season finally brightened up in the Fuenfría area and Autumn began to show its true colours, thanks – I suppose – to the heavy rains that fell in previous weeks.

However, despite the late entrance of nature’s oranges and reds, it would not be true to say that we have been lacking in bright colours in the Sierra during the last few months. And no, I’m not referring to wild flowers, fruits, berries, butterflies or anything like that.  I’m talking about the bright reds of Coke cans and bottles, the blue tops of plastic water bottles, the multicolour wrappings of energy bars, and of course the more ‘natural’ green of beer cans (the urban litter-lout’s idea of how to be ‘eco’ when you go for a walk in the woods?).. not to mention the generous distribution of plastic bags of whatever colour you want and bits and pieces of shiny alu-foil wrapping everywhere you go. Yes, I’m talking trash.. I think I’ve never seen so much rubbish in the Fuenfría valley in well over ten years of regular visiting. Since last August it has been terrible. What’s going on? Do people feel that they need to add a little colour to compensate for the dullness of nature? Are we perhaps feeling guilty because.. well, this year Autumn’s not so bright, maybe because of global warming, perhaps because I’m driving my car around too much.. so maybe I can make up for it by chucking my garish-looking garbage on the side of the trail – or better still into the stream – and in this way I make the landscape prettier for everybody? 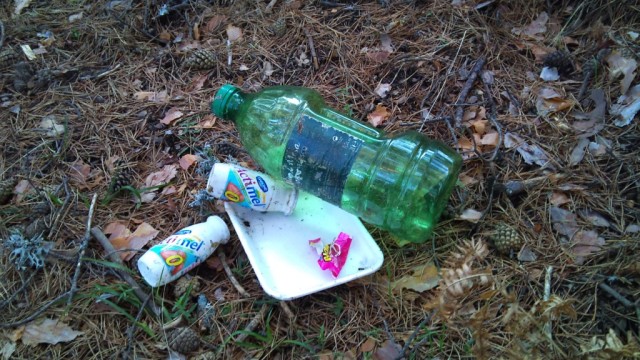 And I’m not the only one to notice the trash piling up this Fall. Look here. And for a more general debate on conservation in the Sierra look here.

Éireannach is ea mé, i mo chonaí insan Spáinn. Rugadh mé i lár na tuaithe, ar feadh blianta bhí mé ag teitheadh uaithi, i bhfad as an tuath, ach sa deireadh d'fhill mé, ar ais go dtí an tuath.. An Irishman am I, settled in Spain. Born was I in the middle of the country, for years I ran from it, far from the country, but in the end I returned, back to the country..
View all posts by coldspringdays →
This entry was posted in Climate change, Conservation, Nature, the seasons and tagged autumnal colour, decorating nature, trash. Bookmark the permalink.